Rahul Gandhi’s latest challenge to PM Modi: “Mr. Prime Minister if you are scared of debating me I can make it easier for you”

Congress president Rahul Gandhi has thrown a new debate challenge to Prime Minister Narendra Modi in election season. All the ‘topics’ that Mr Gandhi brought up have already been ‘debated’ upon by the opposition and the centre more than once in the past.

“Dear PM, Scared of debating me on corruption? I can make it easier for you. Let’s go open book, so you can prepare: 1. Rafale + Anil Ambani 2. Nirav Modi 3. Amit Shah + Demonetisation (sic),” Rahul Gandhi tweeted today as PM Modi addressed a rally at Maharashtra’s Latur, where he attacked the Congress’s manifesto as a document that “speaks the same language as Pakistan’s”. 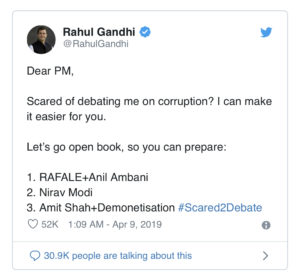 Arvind Kejriwal to PM Modi: Mr. Prime Minsiter Pakistan carried out the Pulwama attack to help you in the General Elections!