Communist Party of India (Marxist)’s youth wing (DYFI) State General Secretary and Central Committee member A. A Rahim was trolled heavily for posting the details of a protest that is being organized by DYFI in the state of Kerala.

Prior to U.S. President Donald Trump’s visit, DYFI has announced a “National Level Protest” in the state of “Kerala”. Since DYFI is non-existent in the rest of the parts of India, people in the social media trolled him for his “Bold statement.”

Few people asked him if they hate America, why did their leaders Pinarayi Vijayan and Kodiyeri Balakrishnan choose America for their medical treatments. Not only the political opponents but also the party caders trolled him for his dumbest statement and the hypocrisy shown by the party. 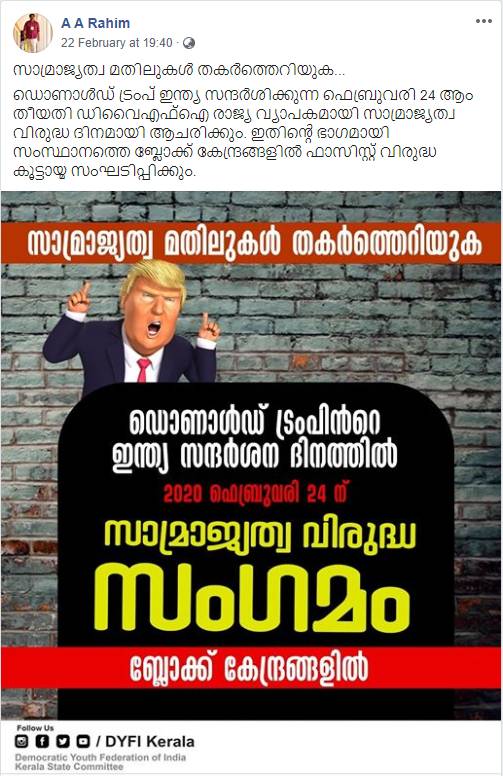 Earlier one local panchayat committee of the party was trolled for passing a motion to remove Donald Trump from the post. This is not the first time the same leader is being criticized for his dumber moves. In another comic incident, AA Rahim along with his party cadres protested in front of a post office in Kerala against the law to revoke article 370.

One of the comments says that the party leaders Pinarayi Vijayan and Kodiyeri Balakrishnan must lead the protest from the front since they were recently got treatments from America’s leading hospitals.

Another says that even though he is a Communist, he felt ashamed of Rahim’s post as their party leaders fly to America even to treat their diarrhea.

One user questions Rahim for being such a hypocrite where the communist party leaders choose America for treatments and their children choose it for education. He adds that the party cadres who blindly follow such leaders are not even worthy of their existence.

Another user trolled Rahim for his dumb post and asked him to relocate the venue of their protest to any Military camp for a change.