Arvind Kejriwal to PM Modi: Mr. Prime Minsiter Pakistan carried out the Pulwama attack to help you in the General Elections!

Continuing his attack on Prime Minister Narendra Modi through a string of tweets, Delhi Chief Minister Arvind Kejriwal on Thursday once again questioned why Pakistan Prime Minister Imran Khan is openly endorsing his Indian counterpart for the 2019 Lok Sabha elections. The Aam Aadmi Party (AAP) Convener further asked whether Pakistan had killed 40 Indian soldiers in Pulwama on February 14 in order to help PM Modi in elections. Kejriwal’s savage dig at the BJP spearhead comes on the day when the first phase of the Lok Sabha elections is being held across 18 states and two union territories in the country. 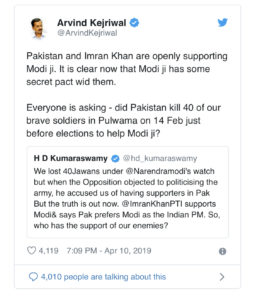 After stressing on a “secret pact” between Imran Khan and Narendra Modi, the Delhi CM went on to ask if Pakistan is funding the NaMo channel. His fiery attack on PM Modi’s official TV channel came after a social media team member of the AAP claimed that there is no owner of NaMo TV on record.

Arvind Kejriwal’s recent dig at PM Modi came on Wednesday when news agency Reuters reported Imran Khan saying that if the next government in India is led by the Congress, then the party might be “too scared” to resolve the Kashmir issue. Khan then said that if “BJP, a right-wing party, wins”, some kind of settlement can be reached in the Valley.

BJP MP to Prime Minister Narendra Modi: “I would rather kill myself than allow the Citizenship (Amendment) Bill to be implemented in the northeastern states